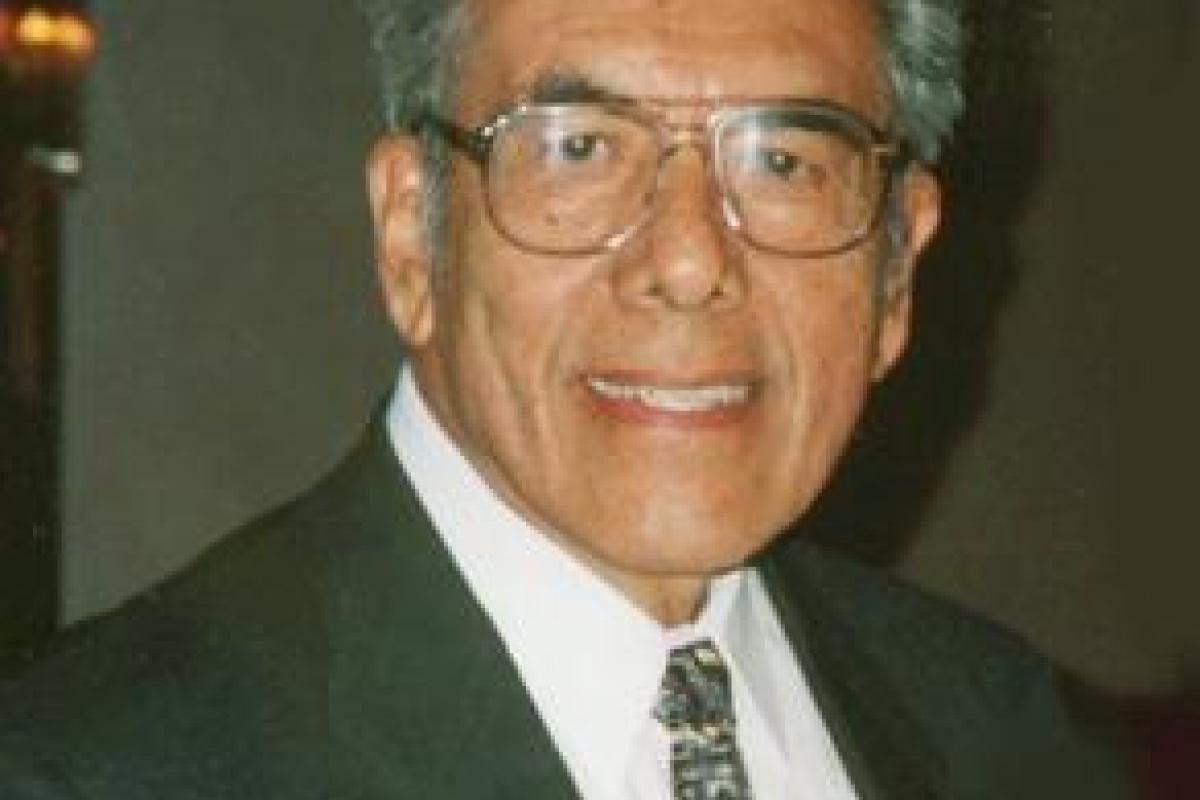 The Arnulfo Trejo collection consists of Trejo's personal papers as well as materials related to REFORMA and Hispanic Books Distributors.

Arnulfo Duenes Trejo was born in Villa Vicente Guerrero, Durango, Mexico on August 15, 1922. His family immigrated to the U.S. when he was three. He spent his youth growing up in Barrio Libre in Tucson, Arizona, and attended Drachman Elementary, Safford Jr. High and Tucson High School.

Trejo served in the military during World War II, in the 143rd Infanty Division in the South Pacific, reaching the rank of sergeant. He received both the Purple Heart and a Bronze Star medal as well as Asiatic Pacific Services medal and the Phillipine Liberation Ribbon for his service. He became a U.S. citizen while enlisted, in 1944.

After the war, Trejo enrolled at the University of Arizona, where in 1949, he received his B.A. degree in Education. Shortly thereafter, in 1951, he earned an M.A. degree in Spanish Language and Literature from La Universidad de las Americas in Mexico City. By 1953, Trejo had also received a M.A. in Library Science from Kent State University. In 1959, he received his Doctor of Letters degree (with honors) from the National University of Mexico.

Trejo began his career as a librarian in Mexico in 1953. By 1955, he landed a position at UCLA as a reference librarian, followed by a four year stint as Assistant College Librarian at California State College at Long Beach. He also spent time directing the library for Stanford University’s Escuela de Administracion de Negocios para Graduados in Lima Peru. Upon his return to the United States, he worked for two years as Assistant Professor of Library Service at UCLA.

In 1966, Dr. Trejo was hired by the University of Arizona, where he served as Associate Professor of Library Science and Bibliographer for Latin American Collections. In 1968, he took a yearlong leave of absence to serve as a consultant for United States Agency for International Development (USAID) in Caracas, Venezuela. His connections to libraries and scholars in Latin America proved beneficial to the University of Arizona, as he helped build one of the richest collections of Latin American materials in the country.

Upon his return to the University of Arizona, Dr. Trejo spent time teaching a course in Mexican American literature. He was also a founding faculty member of the Graduate Library School, where he began teaching courses in Latin American Bibliography in 1970.

Dr. Trejo kept quite busy in the early 1970’s, both as an academic and as an activist. He was instrumental in organizing a community effort to save a downtown monument called “El Tiradito”, or the Wishing Shrine, from being torn down to make way for a new freeway. Trejo’s efforts helped place the shrine on the National Register of Historic Places in 1971. He remained active as a member of Los Tucsonenses, a community organization dedicated to preserving local Latino culture, throughout the 1970s.

Throughout his life he accomplished many things, but was best known for having founded REFORMA, The National Assocation for the Promotion of Library Services to the Spanish Speaking in 1971, and for creating the Graduate Library Institute for Spanish Speaking Americans at the University of Arizona’s Graduate Library School. Latino librarians throughout the country agree that Trejo was the “father of Latino librarianship.” His legacy is a rich one and his admirers are many.

Trejo founded REFORMA, the National Association of Spanish Speaking Librarians in the United States in 1971, and served as its president from 1971-1974. The organization is still in operation, and its purpose is to, among other things, provide a means for bilingual librarians to network with eachother, to promote the collection of Spanish-language materials in libraries, to advocate for the recruitment of Latinos to librarianship, and to provide programming that benefits the Latino community. The organization now has chapters in every corner of the US as well as in Puerto Rico and is now called, REFORMA: The National Asssociation for the Promotion of Library and Information Services to Latinos and the Spanish Speaking

In 1975, Trejo organized and administered the Graduate Library Institute for Spanish Speaking Americans (GLISA) a federally funded project that operated for four years under his direction. 56 individuals earned their master’s degrees in library science through this program. Many of these graduates went on to become directors of major library systems. Today’s Spectrum Scholar’s program, an American Library Association sponsored project, and the University of Arizona’s Knowledge River program were both modeled after GLISA.

In 1980, Dr. Trejo opened Hispanic Book Distributors, a book vending company specializing in books from the Spanish Speaking world, and dedicated to increasing the availability of Spanish language materials in U.S. libraries. Dr. Trejo particularly enjoyed making regular buying trips to Mexico, Spain and Argentina, and his materials were sold to public, school and academic libraries across the country.

Trejo retired from the University of Arizona Graduate Library School in 1984, a full professor, with a long list of accomplishments and publications.

In 1992, after the death of his second wife Annette M. Foster, Dr. Trejo founded the Trejo-Foster Foundation for Library Education, where he was able to continue to influence the library profession by providing educational institutes focused on library services to Latinos and the Spanish speaking.

Among Trejo’s publications they include: Bibliografia Chicana: A Guide to Information Resources, Gale, 1975, The Chicanos: As We See Ourselves, University of Arizona Press, 1979, (Trejo was editor), and Quien Es Quien: a who’s who of Spanish-speaking librarians in the United States, Hispanic Book Distributors, 1994.

Click on the Arnulfo D. Trejo Papers at Special Collections at University of Arizona.