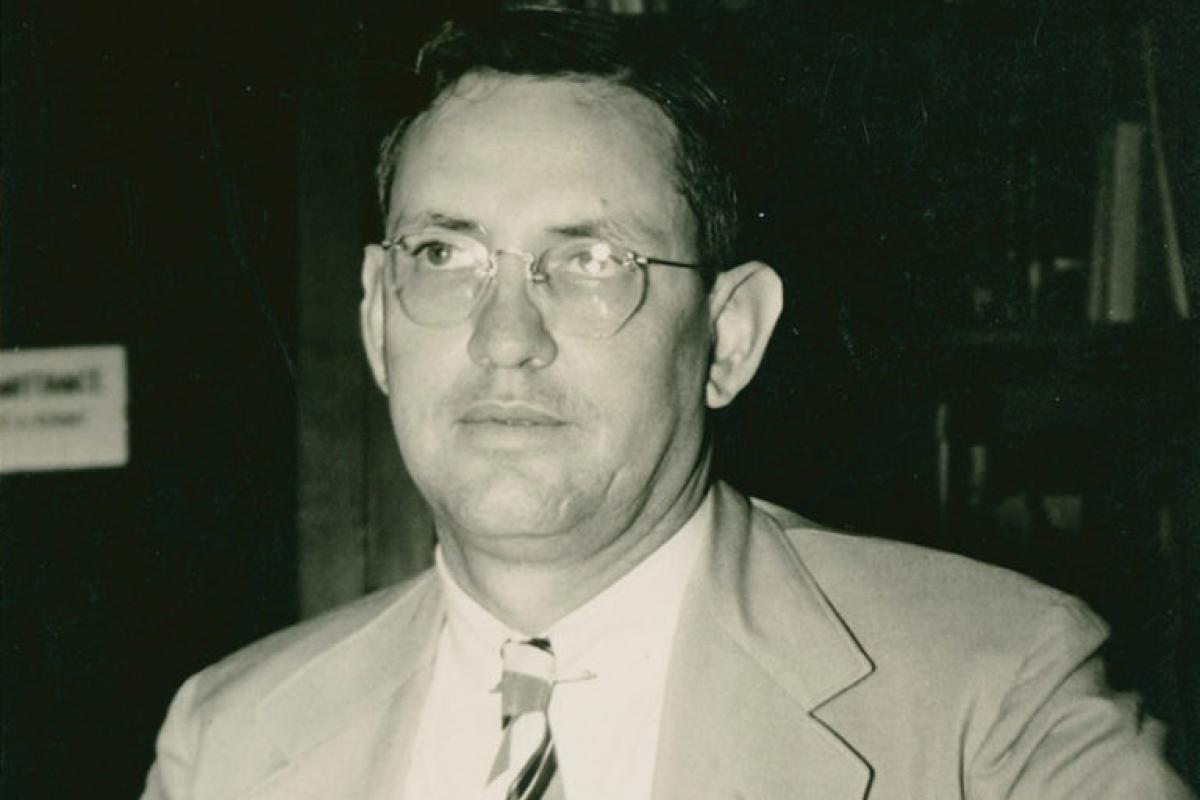 In 1927, Carlos Eduardo Castañeda became librarian of the Genaro García Collection, which became the Nettie Lee Benson Latin American Collection. During his tenure he oversaw many major acquisitions of materials from all over Latin America.

Historian, archivist, and educator, Carlos E. Castañeda was born November 11, 1896, in Camargo, Tamaulipas, Mexico. His father was a professor of French and government at the College of San Juan in Matamoros, but the family moved to Brownsville around 1910. Castañeda's parents both died before he was 15, leaving him with 3 sisters and 3 brothers. Though he began his college career as an engineering major, Castañeda switched to his major to history (under the influence of E.C. Barker), and graduated with a BA from The University of Texas in 1921, having been elected to Phi Beta Kappa. He was married in 1922, and his first daughter, Gloria, was born in 1923, the same year that he obtained his MA from The University of Texas and began teaching Spanish for the College of William and Mary in Virginia.

In 1927, Castañeda was asked to return to The University of Texas, to take control of the newly acquired Genaro García collection, the basis for the Benson Latin American Collection today. While acting as librarian for this collection, Castañeda began to work on his PhD, and to produce more articles on the early history of Texas. He also, in conjunction with Winnie Allen, started and ran the Mexican Photo Print Company, in order to recover copies of documents which he discovered in Mexico, a project that was doomed to failure once the Depression hit in 1929.

Castañeda finished his doctorate in 1932, his dissertation being a translation of the famous Morfi's History of Texas, a text believed lost, which he re-discovered while searching through the records of a Fransiscan monastery. Also in 1932 his second daughter, Consuelo, was born.

Castañeda did not begin his career as a full professor for The University of Texas until 1940, after some protracted debate in the 1930s concerning his salary and teaching responsibilities (Castañeda felt that his salary had been reduced because of his ethnicity). It was these issues that led to his leaving in 1933 to become the Superintendent of the San Felipe School District in Del Rio, Texas, where he met with resistance from white families towards a Mexican superintendent. He would stay only a year.

After returning to The University of Texas for the 1935 school year, Castañeda continued not only his career as a professor, but his writing of Our Catholic Heritage in Texas, a seven-volume work on the early history of Texas. The writing of these books would span decades, the last volume not printed until shortly before Castañeda's death. Also shortly after his return to the university, Castañeda was knighted by the Catholic Church as a Knight of the Holy Sepulchre, and in 1951 became a Knight Commander in the Order of Isabel the Catholic of Spain. These honors were granted on the basis of Castañeda's long-time work with the Catholic community and Catholic history more generally.

Being concerned with the plight of minorities in Texas (such as in the San Felipe School district, where he was forced to obtain a court order to even open the school), Castañeda took another leave of absence in 1943 to work for the Fair Employment Practice Commission (FEPC), an agency that was concerned with helping minorities to obtain the same working conditions and jobs that whites were granted in the 1940s. The Commission would not last past the World War, however, and Castañeda returned to his teaching duties. He continued to actively work against discrimination, and became involved with the Pan American Union, for whom he gave a radio address in 1948 that was broadcast all over the New World.

In the 1950s Castañeda's health failed: he suffered three heart attacks during the decade, which severely limited his ability to write, teach, and stay active in his many causes. The author of twelve books and over eighty articles, and recipient of many honors, Castañeda died on April 3, 1958, at the age of 62.

(Abstracted from the collection record)

Click here for a link the the Carlos Eduardo Castañeda Papers at the University of Texas, Austin