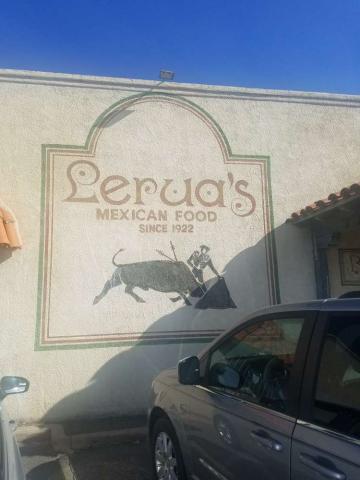 Access image
Image Metadata
Summary:
This is a historypin tour of Lerua's Fine Mexican Foods in Tucson, AZ. Lerua's has been established in Tucson since 1922.
Cultural Narrative:

This narrative was created by sromo1 in the original historypin tour created in 2018:

Lerua's Fine Mexican Foods is a "Sonoran-style" Mexican food restaurant located in Tucson, AZ. Lerua's has been a Tucson fixture for 96 years, a small adobe restaurant located on the corner of Norris Ave and Broadway, has been its location since 1941. Carmen Borgaro Hultquist purchased Lerua's in 1961 from Tony Lerua, since then her son Michael Hultquist and grandson, Michael Hultquist, Jr have kept the business going strong. Michael Hultquist, Jr. is bringing in new styles of cuisine to the restaurant while still keeping the old favorites on the menu. Some new menu items include, fried cauli tacos, seared sea bass and vegan tacos! Tasty chips and salsa that are provided as soon as you sit down. Be careful not to get too full on chips as I am guilty of doing, many times! Owner Michael Hultquist, holds up a photo of his mother Carmen Borgaro Hultquist. Carmen purchased the restaurant in 1961 and it has stayed in the family for 57 years. Lerua's involvement with the Tucson community has spanned several decades. A Tucson fixture that has provided Mexican food for weddings, funerals, quinceaneras and other family events.