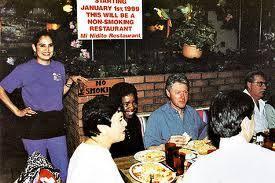 Access image
Image Metadata
Summary:
A well-known Tucson restaurant that has been serving Mexican food since 1952. The establishment made headlines in 1999 when then-President Bill Clinton visited. The restaurant has had many famous guests, including movie stars, athletes, and politicians.
Description:

Pictured is former President Bill Clinton during his famous 1999 visit to the restaurant. The table President Clinton was seated at is now called the "Presidential Table," as pictured.

Mi Nidito Spanish for my little nest has been serving Mexican food in Tucson, Arizona since 1952. The family-owned restaurant, opened by Sonoran couple Ernesto and Alicia Lopez and owned by Jimmy Lopez, is now into its third generation. Mi Nidito has drawn many celebrity guests, including Goldie Hawn, Jake the Snake Roberts, Adam Richman, Madeleine Albright, and more.

Originally only suited to seat about 12 people -- earning its diminutive nickname -- the restaurant now serves approximately 4,000 people a week and is one of the most recognized and popular Mexican restaurants in Tucson. The restaurant grew very popular after then-President Bill Clinton's visit in 1999. His order is now named the President's Plate, which includes a bean tostada, birria taco, chicken enchilada, beef tamale, and chile relleno.