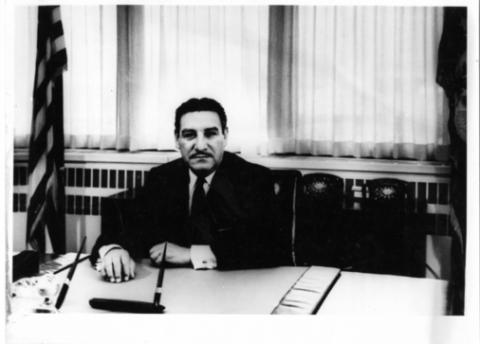 Raul Hector Castro was born June 12, 1916, in Cananea, Sonora, Mexico. He was one of fourteen children- his father was a copper miner and his mother was a midwife. He lived in Mexico as a child until his family moved to the Douglas, Arizona area in 1926. While attending Douglas High School, Castro played football, edited the school newspaper, and graduated with honors. He then attended Arizona State Teacher's College (now Northern Arizona University) on a football scholarship and was captain of the track team and the boxing team. Known as the "Douglas Destroyer," Castro was an undefeated boxer while in college and he won most of his bouts by knockout. He received a B.A. in education in 1939 and he became a U.S. citizen that same year.

Castro spent the next five years working as a foreign-service clerk for the U.S. State Department in Agua Prieta, Sonora, Mexico. He then moved to Tucson and became a Spanish instructor at the University of Arizona. While at the university, Castro was accepted into the law school. He paid his way through law school by continuing to teach Spanish courses. He earned his law degree and was admitted to the Arizona State Bar in 1949. After spending five years in private practice, Castro was elected Pima County Attorney in 1954. In 1958 he was elected as a Pima County Superior Court judge. He served on the bench until 1964, including three years of service as a juvenile court judge.

Castro entered the Arizona governor's race in 1970. He easily won the Democratic primary despite entering the race much later than his primary opponents. He then lost the general election by a small margin to incumbent governor Jack Williams. Castro entered the governor's race again in 1974 and this time he won, defeating Republican candidate Russ Williams and becoming the state's first Latino governor. Castro served as the 14th governor of Arizona from 1975 to 1977. During the 1976 presidential election, Castro supported former governor of Georgia Jimmy Carter. Castro toured with Carter during the 1976 campaign and he spoke at the 1976 Democratic National Convention in New York City, urging the Latino Caucus to lend its support to Carter. Castro's support proved instrumental in Carter's garnering the Latino vote in the Democratic primaries, where Mo Udall was Carter's main opponent, as well in the general election against incumbent President Gerald Ford. In 1977, Castro resigned the governorship of Arizona when President Jimmy Carter offered him an appointment as U.S. Ambassador to Argentina. This ambassadorship posed many challenges: the Argentine economy was in shambles as it suffered runaway inflation and the government was widely accused of human rights abuses. Castro succeeded in maintaining friendly relations between the U.S. and Argentina while putting pressure on the Argentine government to improve its human rights record. He resigned from the ambassadorship in July 1980 and returned to Arizona to resume his law practice.

From 1980 to 2003, Castro's private practice concentrated on the areas of immigration law and international law. Castro retired from his private law practice in 2003. He has been accorded numerous honors over the years, including induction into the Northern Arizona University Sports Hall of Fame as well as receipt of honorary doctorates from Northern Arizona University, Arizona State University, and La Universidad Autonoma de Guadalajara. Also, Arizona Governor Janet Napolitano proclaimed February 16, 2006, as "Raul H. Castro Day" in Arizona. He has been honored by all of the major higher education institutions in Arizona. The Raul H. Castro Institute was established as a collaborative effort between Arizona State University, Phoenix College, and the Maricopa County Community College District. The Institute sponsors policy research regarding the Arizona Latino community. The Raul H. Castro Scholarship is awarded annually to deserving students at the University of Arizona through the Center for Latin American Studies. Also, the Raul H. Castro College of Social and Behavioral Sciences building at Northern Arizona University is named in his honor.

A collection level record can be found here.

Digital items derived from the collection can be found here.

A digital exhibit can be found here.