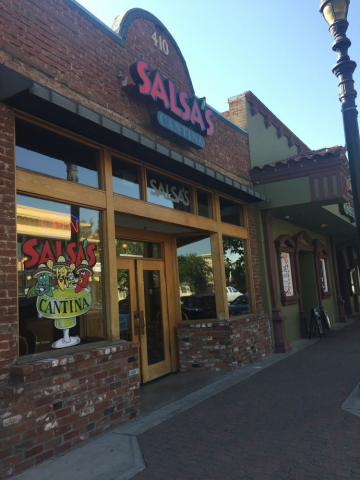 Background for interview from Alicia Diaz Wrest: "I began working in Old Town Clovis, California in September 2015.  Soon after beginning my job, I started to explore some of the local restaurants, and was fortunate to find Salsa’s Cantina.  When I opened the menu, I was surprised to find a variety of gourmet chili rellenos.  While I was skeptical that these would be more of the same omelet battered stuffed canned chilis that I had had at other places, I was absolutely delighted when I was served a relleno that could rival my abuelita’s.  Therefore, when I was assigned a project to document a Latinx food establishment in my community, I knew exactly what restaurant I wanted to explore.  I had a haunch that maybe this food was from the same region as my family, and this project was the perfect opportunity to learn if my suspicions were correct."

On June 22, 2017, I sat down with Jesse G. Mendoza, co-owner of Salsa’s.  He is a warm and lovely man that was happy to share the history of Salsa’s with me.  Salsa’s passionately prepares Mexican food that is from recipes that has been handed down for generations.  The recipes are those of Leticia Mendoza’s family, and were taught to her by her grandmother, Andrea Cortina. Mrs. Cortina lived to the ripe age of 90.  While Mrs. Mendoza was born in Donna, Texas, she was raised in Monterrey, Nuevo Leon, Mexico, by her grandmother, Mrs. Cortina.  Incidentally, this is the birthplace of my father and the reason the food was so familiar to me.  It is the food of my personal culture.  Mrs. Mendoza learned her art in the kitchen at the back of her grandmother’s convenience store.  There they would prepare food for local farm hands.  Mrs. Mendoza grew up making tortillas by hand and all that enter Salsa’s are the fortunate beneficiaries of this fact.

While Salsa’s would not be in existence without these roots, its modern history goes back about 30 years when Mr. and Mrs. Mendoza operated a catering business.  At that time, they lived in Selma, California (approximately 20 miles south of Clovis).  About 7 years into their business, the commissary they used to operate their catering business closed, and they decided it was time to open their own restaurant.  With their young family in toe, they started driving around looking for a perfect place for their restaurant.  They happened upon Old Town Clovis where there were 100’s of people wandering around.  That just happened to be Farmer’s Market, which is an even that is still held in Old Town.  As luck would have it, there was a small restaurant space available on Pollasky (one block over from the current space), in the Old DeWitt building.

The young family opened shop and became a fixture of Old Town Clovis, eventually moving from Selma to become full Clovisites.  Today, the restaurant is prominently located on Clovis Avenue in Old Town Clovis.  Mr. and Mrs. Mendoza work alongside their two adult children, a son and daughter, and their soon to be son-in-law.  It is truly a family affair, and the customers are treated like family.  I can think of countless times I have overheard patrons telling the son, make sure to tell your mother I said hello.  Or when I have seen Mrs. Mendoza go out over her way to inquire as to the status of her guest’s children.  As Mr. Mendoza explained to me, they are actually serving the third generation of patrons, as they now have people they have served for years coming in with children and grandchildren.  As I was interviewing Mr. Mendoza, a patron at the bar leaned over and explained to me that he ate there twice a week and has been for more years than he can count.

In addition to being made to feel like you are family, the décor of the restaurant is open, clean, and inviting.  Now, on to the important part – the food.  As I have already stated, the rellenos are truly to die for.  In addition to the typical cheese stuffed chili, they also serve shrimp, ground beef, shredded beef, mushroom, or chicken and mango stuffed chilis.  Discussing the rellenos, Mr. Mendoza and I lamented over improperly prepared rellenos.  He explained, other places mix in flour, which is not correct.  I asked whether at Salsa’s beat the egg whites almost stiff before adding in the yolk, which he confirmed.  And these are not canned chilis my friends.  These are fire roasted, hand pealed chilis (probably pasillas – but I forgot to ask).   They also specialize in empanadas and gorditas. Their carne asada has a specialty marinade that includes Negro Modello and the carnitas, well Coca-Cola. As if all of this was not enough, you can by flaky fresh hand-made flour tortiillas by the dozen.

One specific item that I enquired about was the arroz.  This is because the arroz is not light orange like you find in many Mexican restaurants, but white.  I asked, “so, is your rice not tomato based? It tastes delicious, but it’s not orange?”  Mr. Mendoza chuckled at me as he gingerly explained that they do not use canned sauce but make their own tomato sauce.  Canned sauce has dye, and that is what causes the orange coloring.  Nothing in Salsa’s is canned.  I was mesmerized.  Mr. Mendoza that the recipes are not carefully measured out, but made from experience. In fact, the two main chefs have been there for more than 20 years.

Salsa’s is a member of the Mexican Chamber of Commerce and Mrs. Mendoza is active in the local Catholic Church, Our Lady of Perpetual Help.  The Mendoza family is part of Clovis.  They consider this to be there community.  Mr. Mendoza explains that the motto of Clovis was “Clovis, a Way of Life.”  He feels that this statement is gospel.  As he says, “Clovis takes care of its own, and when you are one of its own, they support you to no end.”  I must say that Salsa’s takes care of Clovis.