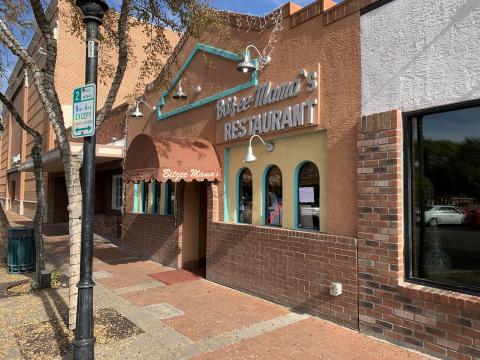 The restaurant was originally founded in 1972 by Carmine Zannelli, an Italian-American man. Carmine, his wife Marie, and his mother-in-law whose nickname because the restaurant’s namesake, “Bitzee Mama,” owned and operated the restaurant for 20 years.

The current owners, Lulu Rodriguez (originally from Compton, California) and Kristine Ortega (a Tolleson, Arizona native), purchased the restaurant in February 2009 and are the fourth owners of Bitzee Mama’s.

They originally had a very diverse menu, incorporating Italian, Mexican, and American cuisine in their repertoire, but when the Carmine’s wife, Marie passed away, she took her Italian food recipes with her, the menu eventually transitioned to include primarily Mexican staples. Over many years and many different ownership changes, the menu has very gradually changed to incorporate each respective owners’ family recipes.

Aside from being owned by four different owners, the restaurant’s size fluctuated dramatically throughout its lifetime, originally being a small café until 1982, when Carmine leased the building next door to expand. Eventually, the cost of utilities with the expansion became too much, so they downsized to the single building again. Lulu clarifies that this change was imperative to their continuing success.