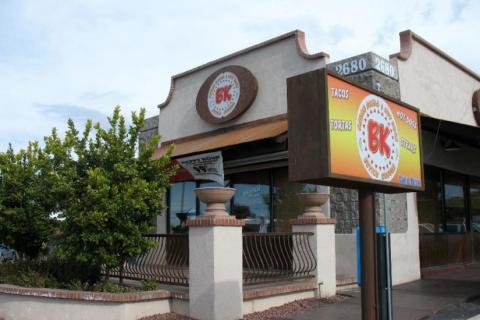 As featured in edible Magazine:

"...Although he was born in Tucson, [Benjamin] Galaz spent his early years in Nacazori, a mining town in Sonora about 1.5 hours south of Douglas. His uncle owned a restaurant, but two or three times a week, young Benjamin would frequent a cart that sold hot dogs wrapped in bacon and topped with grilled onions, fresh diced tomatoes, mayonnaise, mustard, and Salsa Huichol. These fancy franks were a departure from the standard ballpark variety that were popular throughout Mexico; the cart’s owner, Rolando Mendivil, had brought them up from El Chinal, a small town in southern Sonora. Mendivil eventually taught Galaz how to prepare them and helped him raise the money for his own mobile unit.

By the time he was 16, Galaz had built two food trailers from scratch, doing all the designing and welding himself. He sold seafood from one, burros and hot dogs from the other—but not the Sonoran variety. He didn’t want to compete with his mentor on his home turf, and besides, he was U.S. bound.

But when he arrived in Tucson, Galaz was disappointed to learn that his mobile unit didn’t comply with local health department codes; among other things, he needed to install triple sinks. Galaz couldn’t afford to make the adjustments, so he decided to start over. To raise money, he sold the trailer to Daniel Contreras, his sister’s neighbor and a high school friend. He also taught him some of his recipes.

Contreras soon started his own Sonoran hot dog and taco business, El Güero Canelo. Perhaps you’ve seen the trailer parked in front of the original South 12th Avenue location, with the sign, “This is where we began 10-20-93.” You can also find a picture of it on El Güero Canelo’s website, fronted by a bearded, shaggy-haired young Contreras. But it’s the hot dog stand built by the owner of El Güero Canelo’s rival, BK.

In June 1994, Galaz started selling Sonoran-style hot dogs from his new trailer, along with carne asada tacos; he claims to be the first in town to grill the meat on mesquite charcoal. “I was also the first one with a free salsa bar,” he says. “Normally you would pay extra for things like guacamole and jalapeños, but I didn’t charge any more.”

Galaz soon built a second mobile unit where he sold caramelos and quesadillas. In 1995, he bought a vacant space on South 12th Avenue, parked both food trailers there, and built a roof over them for shade. He eventually installed a separate kitchen, refrigerator, and restrooms.

For his next BK, which debuted in 2005, Galaz converted an existing central Tucson restaurant. He offered table service, as well as a drive-through window, and beer, wine, and cocktails.

It was another decade before Galaz marshaled everything he’d learned about the restaurant business, computer technology, marketing techniques, and dining trends to create an entirely new concept. El Berraco opened in 2016 in the former El Mezon del Cobre space, about a block north of the second BK, and highlights Pacific Coast seafood dishes that go from Mexico to South America—and beyond. Galaz took his culinary cue from Mexican dining trends. “If you go to Mazatlán or Puerto Vallarta, you see far more fusion cuisine, influences from other cultures—sushi and even Italian. Tucson Mexican restaurants have been serving the same seafood preparations for a long time. I thought we were ready for something fresh and different.”