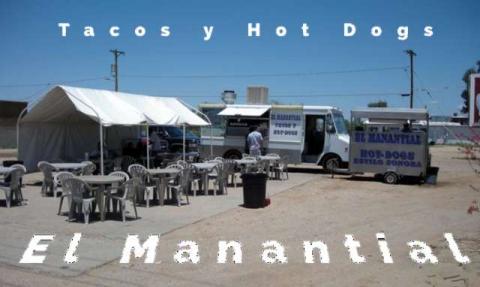 This narrative was created by Noel Guerra and available in his original historypin tour of El Manantial:

Jayme De La Paz, a native Tucsonan is a restauranteur but with a special brand-he sells his delicious creations from a caravan at the corner of Park Avenue and 36TH Street. Mr. De la Paz began this endeavor fifteen years ago by purchasing the lot, and when asked if he planned to buy a building eventually he stated "maybe." He's in no hurry because he says he enjoys the caravan and the atmosphere of serving Sonoran style food from a Chuck Wagon style set-up. Mr. De La Paz is part of this neighborhood as he lives close-by and plans to stay.  Cattle drives out of Texas had a tradition that is kept alive by an old west enthusiast who sells restaurant caliber food in Tucson out of a caravan. The menu includes delicious Mexican choices: Tacos Sonoran Style, Orden de Carne, Burros, Caramelo, Quesadilla, Tortas, Toritos, and Drinks.

As I discussed with the owner in Spanish how he came to the idea of creating a restaurant without a building he indicated that he became interested because he saw other vendors in Tucson selling their food from caravans and small trailers. This was in 2003. Jayme De La Paz says he grew up in the neighborhood at 36th street and Park Avenue. He has always enjoyed the barrio feel of his home in Tucson. The food he says is Sonoran which he indicated is in his roots.