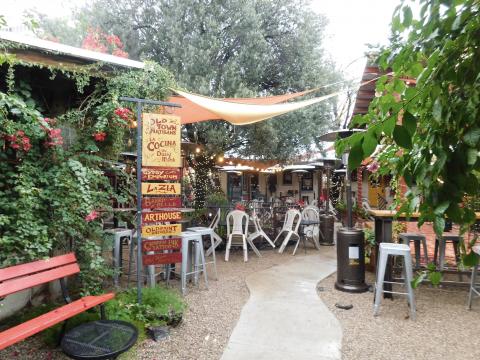 La Cocina has existed in old town Tucson since the 1990s. The space itself has existed since the 1880s, when an entrepeneur used it as a distillery and a market. But it wasn't until 2010 that Jo Schneider took over While Jo didn't plan on opening another restaurant, she kept coming back to La Cocina. It was completely different back then; everything was sort of run down. The trees in the courtyard were sort of dead and dying. The chairs were dirty, and there were plastic broken tables in the courtyard. It didn't make any sense to Jo, because it was such a beautiful, historic old space. The Dusty Monk was just closed up as a storage space. Jo saw so much space that just wasn't being utilized.

Jo saw this place differently. She saw it as a community restaurant, a community space. After about a month of visiting she decided that she could handle this project. Jo put out a letter to the community in the Tucson Weekly asking if people would show up and help her clean the restaurant. There was so much work that needed to be done. Jo said she would feed and drink everyone in exchange for the work. Over 100 people showed up at 8 am on a Sunday morning. They were there from 8 am to 8 pm and it transformed the restaurant. La Cocina was reborn with so much community love. It got people invested in the project because of their participation.

Jo really wanted La Cocina to be accessible to everyone. She wanted it to be a community space, to be affordable and accessible so that anyone could come and have dinner and listen to free beautiful music. To experience this vibe, this laidback Tucson experience, away from the hustle and bustle of the outside world. Jo wanted music, and community connection, so she created it at La Cocina. When Jo can, she supports local ranchers and farmers. But when it comes down to it, she prioritizes making La Cocina open to everyone, and accessible to every price point. One of Jo's mission statements besides making sure that she can access the community and the community can access her, is that she wants to pay her staff a good living wage. She wants her kitchen staff to have money to go out and buy a home. To be able to do things that notoriously similar jobs aren't able to provide. She also tends to overstaff, because she believes in not stressing out her kitchen staff. It's all about balancing affordability and providing accessibility for the Tucson public and her workers.