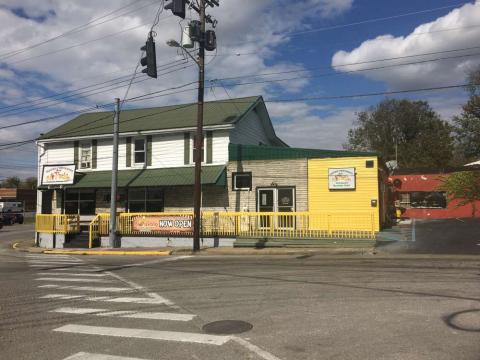 This narrative was created by Peri in the original historypin tour created in 2017:

Mi Pueblo Taquería y Restaurante is a family-owned and operated restaurant located in Danville, Kentucky. Although it just opened in February 2017, it’s become a favorite spot for fresh and traditional Mexican food. Patrons love their authentic style Mexican street tacos (asada, pollo, pastor). Mi Pueblo is owned by Isabel Cummins, her brother Fernando Moran, and their brother-in-law José David Martinez, all from San Salvador. They bought the building’s previous restaurant, Freddy’s Italian, then renovated the building and kitchen and reopend as Mi Pueblo Taquería y Restaurante in February 2017. Their daily specials are quite popular and often include Chimichanga style burritos. One item that stands out on their menu is the Burrito Kentucky, which is a California Burrito with a Kentucky name. Mi Pueblo's Mexican Street Tacos are among their most popular items. This picture shows two tacos al pastor, one asada taco, and one pollo taco. They're served with onions, lime, radish, and cilantro.

Isabel Cummins co-owns Mi Pueblo Taquería y Restaurante in Danville, Kentucky along with her brother Fernando Moran and brother-in-law José David Martinez. They are all from San Salvador. Isabel moved to Danville in 2004 and started working at another local Mexican restaurant. In 2015, Isabel bought the building’s previous restaurant, Freddy’s Italian. The plan was to serve both Italian and Mexican food, but the kitchen wasn’t equipped for a Mexican restaurant. It didn’t have large enough coolers for the fresh vegetables required. It also didn’t have a fryer or a large enough flat grill. So, they renovated the building and kitchen, and reopened as Mi Pueblo. In Mi Pueblo’s first nine months of opening, the restaurant has been active with two events at Centre College in Danville. They catered a “Poetry and Migration” convocation that hosted El Salvadoran poet Javier Zamora in October 2017. They also donated food to the student-run Latino Food Festival. Isabel says they plan to be active in the festival every year. She says the restaurant would welcome more opportunities to connect with the Danville and Centre College community. Isabel says that their customers love their authentic style Mexican street tacos (asada, pollo, pastor, barbacoa, carnitas). Their daily specials are often popular and often include Chimichanga style burritos. One item that stands out on their menu is the Burrito Kentucky, which is a California Burrito with a Kentucky name. Isabel says they would like to serve food more traditional to El Salvador, like pupusas, but dishes like these are more labor intensive and Danville customers might not order them. Isabel’s sons, Jeffery and Oscar, and her sister, Elsa, also work at Mi Pueblo. Other members of the staff come from Michoacán, Mexico and Guatemala.