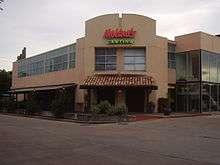 This narrative was created by erb13 in the original 2017 historypin tour:

Houston, TX is a city of food. And there’s almost no place in the city that does Tex-Mex the way Molina’s does. Currently, Molina's has three locations and while none of them are particularly near what Houstonians consider the "Latin American side of town", with the infrastructure of the city, they aren't far. There’s one in the heart of Bellaire, a city within Houston, TX, one in Woodlake/Briar Meadow, and the one near the Heights. While it’s known for being a family restaurant chain, there’s also the sense of family in the restaurant as the sense of “family” extends beyond the owners of the chain, but to the people that work there as well. In 1929, Raul Molina left his hometown of Laredo, Mexico to go to Houston to make a better life for himself. He was 18 at the time and found work as a dishwasher and a busboy.  On June 12, 1941, Raul and his wife Mary purchased the first Molina's Cantina at 1919 West Gray. They called it the Old Monterrey Restaurant then. They didn't have a lot of money, but the family of four worked and lived at the restaurant. They kept it functioning and grew its presence and reputation for the next two years before they bought the Mexico City Restaurant at 3916 South Main. In 1952, the restaurant was renamed Molina's Mexico City Restaurant and later Molina's Restaurant & Cantina. As the years went on, Molina's was relocated, opened, and expanded in keeping up with Houston's population growth.  In 1977, Raul Jr. became the full owner of the business and his three sons began working for the company as well. As of 2017, the three brothers, Raul III, Ricardo, and Roberto, still operate and maintain the restaurants. Molina’s is known for various dishes, usually named after friends of the owners or longtime customers such as the “CW Special”, “Raulito’s Shrimp Special”, and “William’s Special.” However, the thing that people really rave about is “Jose’s Dip”. It’s essential chili con queso and spicy ground beef, but in a city of Tex-Mex, you can’t go wrong.

For people who don’t know, Raul Molina is considered a pioneer in Tex-Mex cuisine. Tex-Mex is generally considered to be a fusion of Texas and Mexican flavors ranging from Texas grilled meats with Mexican spices, to traditional Mexican food and anything in between. More than a fusion of Raul’s humble beginning and his legacy, Molina’s as a chain and in every restaurant is an experience that can’t be matched anywhere else. Treating everyone like family is what drives their service as well as their food. Aside from his local appeal, Molina’s has been on several “Top” lists for various dishes for its place in Houstonian history and generally good food. As far as I can tell, the Molina brand will be in business for a long time to come as it’s not only the oldest but one of the best establishments in the city. It’s truly an integral part of Houston.

Various locations in Houston, TX. There's one in the heart of Bellaire, a city within Houston, TX, one in Woodlake/Briar Meadow, and the one near the Heights.