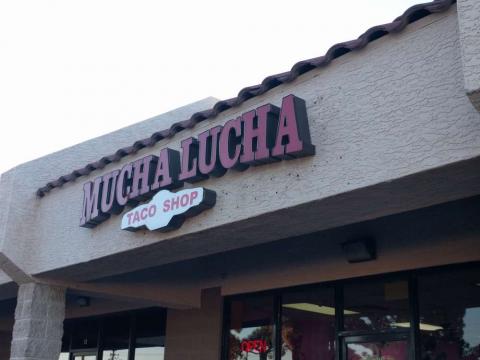 This narrative was created by Anna Chenoweth as part of the original 2017 historypin tour:

The South Scottsdale location of Mucha Lucha Taco Shop is a hidden gem of the neighborhood. This location is nestled into a small strip-mall between a Farmer’s Insurance and an Escape Room. Although there are other locations, this one opened in June of 2015. If I hadn’t seen it on a “top ten” list last year I wouldn’t have known it was even there. Once you are through the doors the décor is what stands out. The walls have Lucha Libre Mexican wrestlers drawn in Sharpie on them, there are wrestling masks hanging up, and the tables have Lucha Libre wresters on them as well. Jaime “Jimmy” Zarraga and Fernando Espinoza are co-owners of this location. While Jimmy runs the South Tempe shop, Fernando runs South Scottsdale. On June 15th 2017 I spoke with Fernando about the location he owned and ran and learned about how it came to be. He grew up in Puebla, Mexico and spent much of our conversation describing Puebla and his nostalgia about all of his memories relating to the food there. As a child and even a young man, Fernando didn’t realize he had any place in a kitchen. In his community, the only people that were in the kitchen were women. Women did all of the cooking and cleaning and it was seen as emasculating if a man were to do any of it. This all changed once he had been in America for several years. He moved to Arizona about 25 years ago, when he was in his early twenties. It was then that he realized there were men winning awards for cooking, being chefs, and occupying kitchens. Fernando has spent many years in restaurant kitchens during his career. He started as a dishwasher and cook and spent years learning to prepare various dishes. In our conversation he stressed that his experience is not just in Mexican food but also other types of food like Thai, Chinese, and American. When Fernando describes his favorite recipes he can be seen closing his eyes and drawing a deep breath in through his nose, as if sniffing the air. He describes his senses all coming together to form memories related to food. When he opened the South Scottsdale Mucha Lucha with his partner about two years ago, his main goal was to capture the flavors, smells and recipes from his past. He describes this as “rescuing the flavors” of Puebla. Fernando has not been back to Puebla since he moved to the United States. When I asked him about this his face dropped and there was blatant sadness in his eyes. He went on to describe how the town is dying. What used to be a vibrant place full of communities is now deteriorating and not even on the government’s radar for help. But he still stays in contact with his family there and many of his old friends. It is from these contacts that he acquires new and old recipes to try out at Mucha Lucha. Among many of the menu items, the flavors stem from his past in Puebla. The menu at this location is hand-written in chalk on a board hanging from the ceiling. The South Scottsdale location of Mucha Lucha is known for some of their signature menu items. One of their most popular items is the surf and turf burrito. This comes packed in a tortilla with flavorful spicy shrimp and carne asada, black or pinto beans, and sautéed peppers. The rest of the filling is up to you. Mucha Lucha is set up like Chipotle. You are first in front of their meat varieties, six of them are slow cooked with various types of chiles and other flavors. The flavorful guajillo chicken is always my go-to choice. There is also chile verde barbacoa with a lot more spice, too much heat for some. Other meats include tinga chipotle chicken, red or regular carnitas and carne asada. There are also taco staples like shrimp and fish. The tortillas at Mucha Lucha come from Mama Lola’s Tortillas in Phoenix but it is what they fill them with that they focus on. Once you have picked your meats, beans, and rice you can move down the line to add other toppings. Things like pico de gallo, roasted chiles, cilantro, lime, pickled onions, cheeses, and a creamy chipotle sauce. Not to mention the variety of salsas, most of which pack some serious heat. Hanging up on the wall behind the front counter there is a hand written sign with some of the popular signature items at this location. One of them is an “El Jefe” burrito which a regular customer asked for once and it became a staple for many. Fernando said there are groups of guys that order it regularly and when they see them coming the cooks exclaim “El Jefes are coming!” Packed with carne asada, chorizo, bacon, onions, and eggs – I asked Fernando if he thought this was an authentic Mexican item. He quickly said no but explained that he likes to experiment and is always happy to fulfill his customers’ requests in the kitchen. No matter what you order on the menu at Mucha Lucha in South Scottsdale, you can be sure it will be full of flavors you won’t find anywhere else in Arizona.