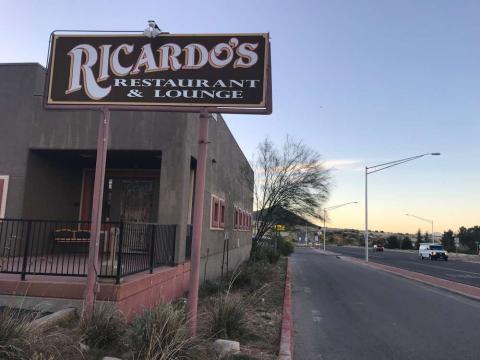 Ricardo's Restaurant and Lounge is a family owned and operated legacy that has been located in the Sierra Vista-Hereford area for the past 49 years. Ricardo's is a landmark in the area and a local institution. It is a frequent destination suggestion from locals to visitors to the area.

Not only is Ricardo’s embedded in the bedrock of the small southern Arizona town of Sierra Vista, but the restaurant and the Aquirre family are active supporters to the local economy and community. They sponsor local little leagues and soccer teams, as well as parade floats during the two major parades of the year; the Veterans Day parade and the December parade.

The Ricardo legacy actually began in Bisbee, Arizona in 1939 when Ricardo’s parents, Arnold and Tillie Aguirre, opened and operated their restaurant, El Charro Café. Their venture was so successful that they opened three expansions. Fast forward thirty years, and in 1969 Ricardo opened his own restaurant which “has proudly served [the] Cochise County Community since that time,” in its original location.

However, disaster struck in the summer of 2011. The months of May and June of that year saw the horrific Monument Fire wage its destructive course through the Huachuca Mountains and into the Hereford area. Many structures were lost due to this natural disaster; one of them being the original Ricardo’s restaurant on June 19, 2011. It was a loss deeply felt by the community. However, the community rallied behind the Aquirre family and through community support and their ingenuity they decided to rebuild. Construction began on the rebuilding of Ricardo’s in March 2012. Ricardo’s reopened its doors in a renovated and larger restaurant in May 2012, and has been open ever since. The current location of the restaurant is only a few feet from its original location, and just behind the new building’s façade lie the fire scorched rubble of the original building.

I have lived most of my life in the Sierra Vista area, and I not only have extremely fond memories of the original Ricardo’s, but the good times continue with the current restaurant. Ricardo’s offers its guests the opportunity to enjoy authentic Mexican cuisine, while having the ability to relax in a familiar environment. When you enter Ricardo’s you are family. Ricardo’s warm and welcoming environment, not only insures continued visitation from the local regulars, but it makes anyone who walks thru the front door feel like they  belong. Ricardo’s is a local gem that not even a wildfire could subdue. It is a local establishment that helps make Sierra Vista a pleasant place to live and visit.