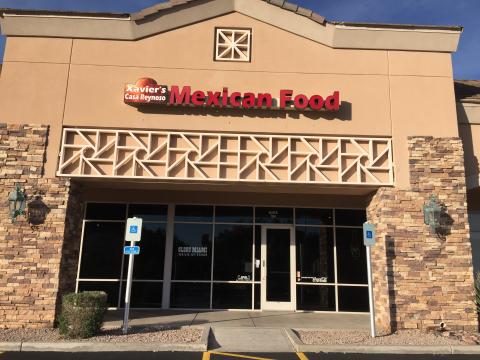 Xavier’s Casa Reynoso is located in Mesa, AZ and is a family-owned Mexican restaurant serving Sonoran-style Mexican dishes. Xavier’s is one of sixteen family-owned restaurants that originated from the Globe-Miami region of Arizona. The owners, Xavier and Belinda Reynoso, have been carrying on Xavier’s family’s entrepreneurial spirit for the past 22 years, the past four at their current location. Xavier’s parents operate Casa Reynoso, off Mill and Southern in Tempe, and his son owns XJ'S Casa Reynoso in Gilbert, AZ. All sixteen restaurants draw from family recipes used by the founders of the first family restaurant, sisters Josephine Picazo, Salustia Reynosa and Pilar Esparza.

Family History: Xavier’s is one of 16 family-owned restaurants that originated from the Globe-Miami region of Arizona, and has roots in the Mexican states of Sonora and Zacatecas. In 1938, sisters Josephine Picazo, Salustia Reynosa and Pilar Esparza opened the first restaurant, El Rey Cafe in Miami, AZ. Defying the social norms of the day, the three sisters pursued their entrepreneurial spirits while their husbands worked as miners in central Arizona’s Copper Basin. In the beginning, their major clientele consisted of miners who helped them become a stable restaurant in the region. This support led Picazo, Reynoso and Esparza to expand to the metro Phoenix area. Over time, their children begin to establish restaurants throughout the Phoenix area and Globe-Miami region. Xavier’s parents operate the Tempe location, Casa Reynoso. His cousins and son have upheld their family’s legacy by carrying on these restaurants from 1938 into the 21st century.