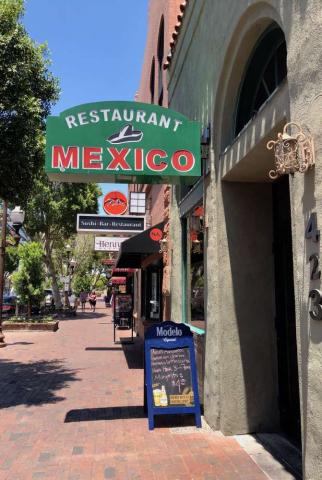 This narrative was created by ehervig as part of the original historypin tour from 2018:

Restaurant Mexico first opened in 1977 by owner Carolina. She and her family originally ran a restaurant in Chicago, and wanted to open up something similar when they moved to Tempe. The recipes are her mother's, who was from Guadalajara. At the time, she said, Jalisco style food was not common in Tempe, so the dishes were really something different and it took time to gain popularity within the community. It was also difficult to get ingredients. They had to import the white cheese and tortillas from Mexico and ship in fresh cilantro from California. These days the ingredients are more readily available, but for many Tempe residents, Restaurant Mexico was their first experience with them. The restaurant can get noisy with chatter during the peak lunch and dinner hours, drowning out the music playing over the boombox in the back.

This location right on Mill Ave in the heart of downtown Tempe is the fourth since the restaurant opened in 1977. The storefront looks out at the busy street and there is a good amount of foot traffic. The staff have told me they miss the old locations due to parking scarcity downtown, but say the location is great whenever special events are held and there are crowds aplenty looking for something tasty to eat. This photo shows an open section of the wait staff's area, including the white board which announces the daily special. Today's board shows the special is Chicken Pipian, chicken covered in a home made sauce made from pumpkin seeds and spices - so the day must be Monday. The kitchen can be partially seen through the half window where orders are passed and dishes are set for staff to bring to eager customers. The kitchen is always busy, but if you shoot a smile through the window, you're sure to get one back! The space inside is long and narrow. During busy hours, the music is drowned out by the chatter echoing from the walls. The room seems dark but the light that comes in throughout the day is very calming, and the sun is never too bright, even during sunset.

Restaurant Mexico has been acknowledged many times during its 40 year history in Tempe. Their various awards are displayed on the east facing wall towards the entrance. The menu is simple and straightforward, and has not changed drastically for 4 decades (except for some design updates). This side shows the ala carte options, soups, and salads. While many of the recipes are the same ones passed down by Carolina's mom, longtime chef Angel has also added his own touch to both menu and dishes. I learned he is responsible for the chimichangas, nachos, and carne asada quesadilla to name a few. The chips and salsa are made fresh every day and are complimentary with a meal. The chips are fried in the kitchen using the tortillas delivered from a local factory. The salsa tastes a little different each time, depends on the chiles and the cook who makes it. Long time server, Angie, says she usually suggests newcomers try the Taco Suave - a soft taco filled with slow-cooked, slightly spiced pulled pork. The dinner comes with Spanish rice and refried beans made in the traditional way with lard. Customers can order a "Clare" style enchilada or burro - whole beans and avocado in a tortilla covered in their special green sauce. The Clare was named after an old server named Clare who was vegetarian, and wanted a meatless option to serve to customers. The only dessert on the menu is homemade flan - this recipe has a creamier consistency than many and has a burned layer of custard on surface, topped with a giant helping of whipped cream.

The most important part of any restaurant is undeniably the people behind it all:Lydia (Carolina's daughter), chefs Karina, Angel, and Laura, and waitress Angie.The cooks and waitresses have been working here for decades and together have created an environment that makes people want to come back, not only for the great food, but for the warmth and great conversations. All customers are treated like family.